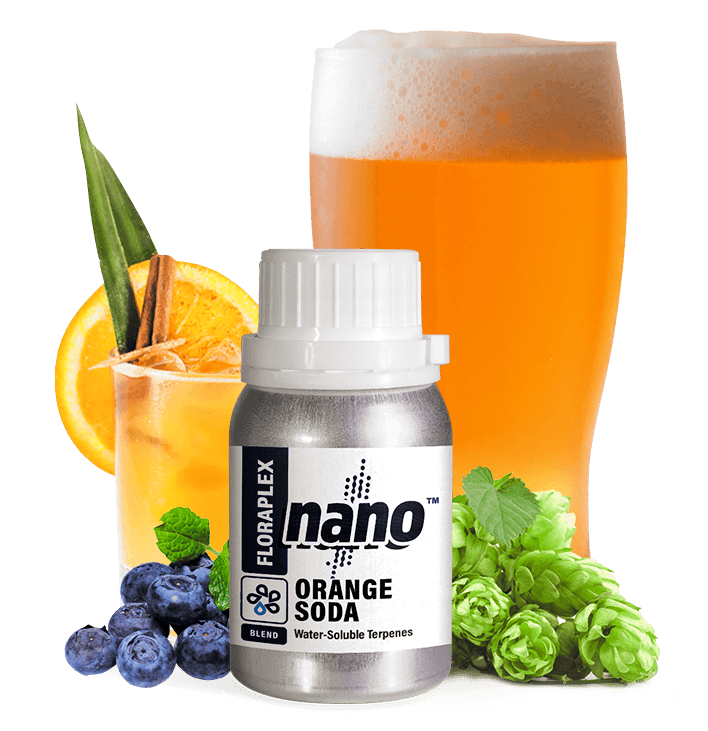 Our in-house chemistry staff has extensive experience in the beverage industry, specifically in commercial brewing and related chemistry. Floraplex’s cutting edge water-soluble terpene technology is the result of combining next-generation high-energy homogenization methods with our proprietary emulsification system. Our process splits terpene molecules into nano-sized particles (colloidal dispersions) and then emulsifies the nano-terpenes in high purity water to make concentrated water-soluble terpene stock solutions. Learn all about our process and products further down the page. 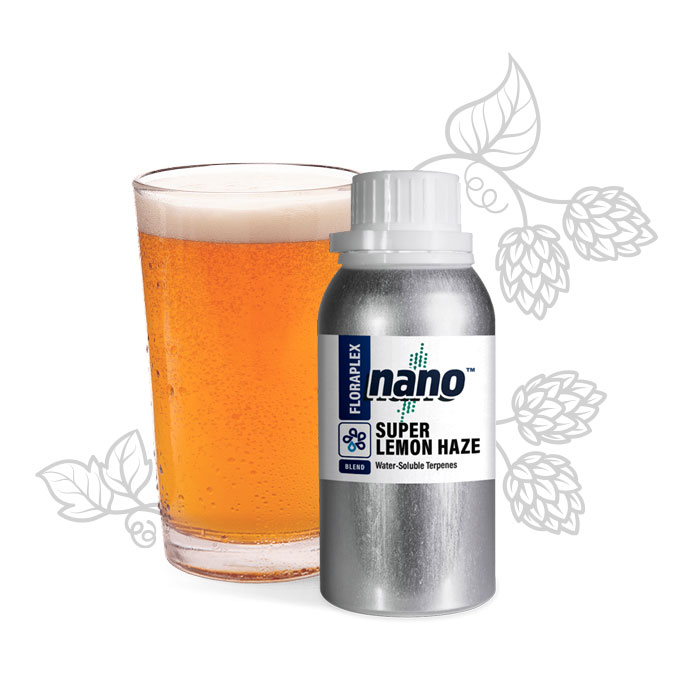 Choose from dozens of pre-blended nano-emulsified terpenes that are precisely mixed to mimic the flavor and aroma characteristics of your favorite terpene profiles.

What are water soluble terpenes?

Water-soluble terpenes are made from oil-soluble terpenes biosynthesized by nearly all plants, including hops, and hemp. It is the terpenes in hops that give beer much of its characteristic aroma, including hoppy, floral, and citrus notes. When hops are added to the boil kettle, as late hop additions, or to the cold-side, their water-insoluble terpenes are dispersed into the wort or beer, but because they are not water soluble they do not dissolve into the water. And depending upon the stage the hops are added, heat from the boil kettle and/or the yeast in the fermenter will transform much of these terpenes into other types of terpenes, changing the aromatic profile provided by the hops.

What are they used for?

Brewers use them to supplement or replace the terpenes from traditional hop cone, pellet, and extract additions. Our water soluble terpenes are very easy to add to any beverage during production. Adding unique aromas and flavors to beer, like those found in Floraplex’s products, are a great way for beverage manufacturers to conveniently and economically enhance and better control the smell and taste of their products.

How are water soluble terpenes made?

Emulsions are generally divided into two high-level classes: microemulsions (MEs) and nano-emulsions (NEs). Within the NE class are translucent nano-emulsions (TNEs). MEs and NEs are colloidal systems with differing thermodynamic and kinetic stabilities; MEs are thermodynamically stable and NEs are thermodynamically unstable yet kinetically stable. Because the spherical droplet radius (size) ranges of MEs (10-6 micrometer or “μm”) and the sphere radius ranges of NEs (10-9 nanometer or “nm”) can overlap, with ME droplets in the high-end of the ill-defined nano-metric range1, MEs and NEs can, therefore, be defined as:

The nano-metric dispersion of one liquid phase into another one in which it is not soluble. They are generally composed of a  [continuous] water and an [dispersed] oil phase; their dispersion of one in the other is allowed by the presence of amphiphilic molecules able to decrease the interfacial tension between the two immiscible phases, called surfactants.2

ME droplets can be as small as 500 nm, an equivocal upper fixed limit of the nano-metric range1. Therefore, the main discriminating factors between MEs and NEs include:1,2,3

Generally, NEs when defined by particle size are those emulsions with mean sphere (particle) radii of less than 100 nm1. As noted previously, however, the academic debate is ongoing as to whether the upper limit of the nanometric range should be 100, 200, or 500 nm, and whether particle size should be a determining factor in the first place. TNEs, on the other hand, are easily defined by their mean sphere radii using a dynamic light scattering analyzer (measured by intensity method), or visual inspection for translucency with the naked eye and a flashlight. The sphere size upper limit to define TNEs may arguably be set at 40 nm, with less than 30 nm providing the highest translucency and even transparency in some cases1.

Related to PSD is another important value, the polydispersity index (PDI), “a dimensionless value that describes the broadness of the droplet size distribution [PSD] curve.”2 Essentially, PDI is used to calculate the uniformity of an emulsion based on its PSD curve. PDI is useful because it provides insight into an emulsion’s particle size uniformity by “provid[ing] a measure of the narrowness of the particle size distribution, with values ≤0.1 indicating a very narrow distribution.”4 Emulsions with PDI of less than 0.1 are highly uniform in terms of particle sizes (i.e., monodisperse) with very narrow PSD (range of smallest to largest particle nm is small), and therefore they have greater resistance to physicochemical inconsistencies, flocculation, coalescence, and/or gravitational separation. According to the HORIBA Group, a leader in the manufacture of dynamic light scattering devices,

Floraplex Terpenes is the world’s trail-blazing leader in translucent water-soluble terpene nanoemulsions. Specializing in the formulation and manufacturing of natural, clean label, food-grade TNEs with oil phase, and active ingredient loads exceeding 40%! Unlike all of our competitors, we are committed to providing the most bioactive, efficacious, and highest quality products at affordable prices, so we only sell translucent and transparent nanoemulsions with sphere radii less than 40 nm and PDI less than 0.1:

[T]here is some evidence that the bioavailability of lipophilic components increases appreciably when the radius of the droplets containing them falls below about 100 nm, which is at least partly attributed to the steep increase in the water-solubility of lipophilic components below a critical particle size due to an increased Laplace pressur[e.] This effect increases the local concentration of the solute in the aqueous phase in close proximity to the droplet surface.1

[TNEs] can be readily incorporated into sports drinks, clear beverages, cosmetics and medicinal formulations. [TNE] systems, by the virtue of their small size droplets and improved solubility and stability properties, offer enhanced oral bioavailability and biological efficacy to dispersed bioactives. A thin layer of surfactant acts as a barrier between the oil phase and aqueous phase, making O/W [oil-in-water] nanoemulsions suitable for encapsulating fat-soluble [lipophilic] bioactives [like terpenes].3

Brewers use them to supplement or replace the terpenes from traditional hop cone, pellet, and extract additions. Our water soluble terpenes are very easy to add to any beverage during production. Adding unique aromas and flavors to beer, like those found in Floraplex’s products, are a great way for beverage manufacturers to conveniently and economically enhance and better control the smell and taste of their products.

Which ingredients does Floraplex use to make these?

We take customer health, product quality, and beer seriously. So, we use naturally sourced ingredients that are vegan and cruelty free, clean label, GRAS, and non-GMO.1 We seek only the best – that’s why we use natural, organic surfactant(s) and a stable, highly purified form of natural vitamin E (D-α-Tocopherol acetate) as part of our antioxidant system.

Read more about our ingredients

To increase terpene aromatic profiles and flavor perception within beer, prevent Ostwald ripening, and reduce particle size we add purified palm-free plant-based carrier oil(s) and surfactant(s) into the oil phase. To the water phase we add unique plant-based surfactant(s) and bioavailability booster(s), optimizing emulsion clarity and stability through a SOR (surfactant-to-oil ratio) of less than 0.5 and addition of natural pH and oxidation stabilizers – preventing creaming and off-flavors while ensuring the emulsion zeta potential is less than -50 mV and the PDI is less than 0.1.

Why would breweries want to add them to their beer?

Are your terpenes TTB approved?

How well do your terpenes mix into beer?

When our translucent terpene nano-emulsions are mixed with beer, they effortlessly and instantly dissolve without affecting clarity, turbidity, or color. Beneficially, head retention may be increased for lighter beer styles.